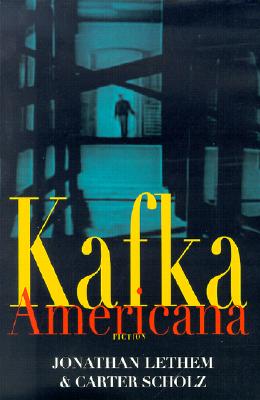 Previously published only in a signed, limited edition, Kafka Americana has achieved cult status. Norton now brings this reimagination of our labyrinthine world to a wider audience. In an act of literary appropriation, Lethem and Scholz seize a helpless Kafka by the lapels and thrust him into the cultural wreckage of twentieth-century America. In the collaboratively written "Receding Horizon," Hollywood welcomes Kafka as scriptwriter for Frank Capra's It's a Wonderful Life, with appropriately morbid results. Scholz's "The Amount to Carry" transports "the legal secretary of the Workman's Accident Insurance Institute" to a conference with fellow insurance executives Wallace Stevens and Charles Ives, to muse on what can and can't be insured. And Lethem's "K for Fake" brings together Orson Welles, Jerry Lewis, and Rod Serling in a kangaroo trial in which Kafka faces fraudulent charges. Taking modernism's presiding genius for a joyride, the authors portray an absurd, ominous world that Kafka might have invented but could never have survived.