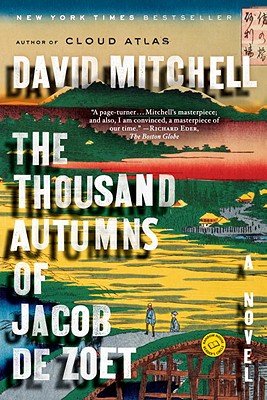 The Thousand Autumns of Jacob de Zoet: A Novel

In 2007, Time magazine named him one of the most influential novelists in the world. He has twice been short-listed for the Man Booker Prize. The New York Times Book Review called him simply "a genius." Now David Mitchell lends fresh credence to The Guardian's claim that "each of his books seems entirely different from that which preceded it." The Thousand Autumns of Jacob de Zoet is a stunning departure for this brilliant, restless, and wildly ambitious author, a giant leap forward by even his own high standards. A bold and epic novel of a rarely visited point in history, it is a work as exquisitely rendered as it is irresistibly readable.

The year is 1799, the place Dejima in Nagasaki Harbor, the "high-walled, fan-shaped artificial island" that is the Japanese Empire's single port and sole window onto the world, designed to keep the West at bay; the farthest outpost of the war-ravaged Dutch East Indies Company; and a de facto prison for the dozen foreigners permitted to live and work there. To this place of devious merchants, deceitful interpreters, costly courtesans, earthquakes, and typhoons comes Jacob de Zoet, a devout and resourceful young clerk who has five years in the East to earn a fortune of sufficient size to win the hand of his wealthy fianc e back in Holland. But Jacob's original intentions are eclipsed after a chance encounter with Orito Aibagawa, the disfigured daughter of a samurai doctor and midwife to the city's powerful magistrate. The borders between propriety, profit, and pleasure blur until Jacob finds his vision clouded, one rash promise made and then fatefully broken. The consequences will extend beyond Jacob's worst imaginings. As one cynical colleague asks, "Who ain't a gambler in the glorious Orient, with his very life?" A magnificent mix of luminous writing, prodigious research, and heedless imagination, The Thousand Autumns of Jacob de Zoet is the most impressive achievement of its eminent author. Praise for The Thousand Autumns of Jacob de Zoet

"A page-turner . . . David] Mitchell's masterpiece; and also, I am convinced, a masterpiece of our time."--Richard Eder, The Boston Globe

"An achingly romantic story of forbidden love . . . Mitchell's incredible prose is on stunning display. . . . A novel of ideas, of longing, of good and evil and those who fall somewhere in between that] confirms Mitchell as one of the more fascinating and fearless writers alive."--Dave Eggers, The New York Times Book Review "The novelist who's been showing us the future of fiction has published a classic, old-fashioned tale . . . an epic of sacrificial love, clashing civilizations and enemies who won't rest until whole family lines have been snuffed out."--Ron Charles, The Washington Post "By any standards, The Thousand Autumns of Jacob de Zoet is a formidable marvel."--James Wood, The New Yorker "A beautiful novel, full of life and authenticity, atmosphere and characters that breathe."--Maureen Corrigan, NPR

Look for special features inside. Join the Random House Reader's Circle for author chats and more.

Title: The Thousand Autumns of Jacob de Zoet: A Novel

The Thousand Autumns of Jacob de Zoet: A Novel