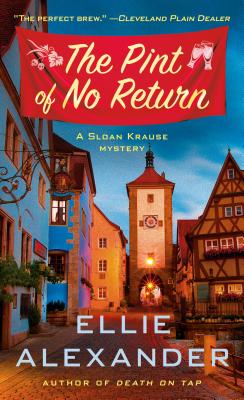 The Pint of No Return: A Mystery (A Sloan Krause Mystery)

Lights. Camera. Murder. . .It's all in a day's work for beer maven and amateur sleuth Sloan Krause in her latest hopping mystery.

Everyone in the village of Leavenworth, Washington, is buzzing with excitement over this year's Oktoberfest activities--and eagerly awaiting Nitro's latest offering of Cherrywizen, made with locally sourced cherries. But brewmaster Sloan Krause is feeling tapped out. Between trying to manage the pub, her pending divorce, and her mounting feelings for Nitro's owner Garrett Strong, she's fermenting in internal turmoil. To complicate matters, documentary filmmaker Mitchell Morgan and his production crew have come to town to film the Bavarian-themed extravaganza. His antics put the town on edge--until Sloane finds Mitchell sprawled out in front of an Oktoberfest tent in the middle of town. Was his death caused by one pint too many--or is this a case of murder by microbrew?

"Alexander has created an appealing cast of characters...Best of all, she treats the reader to a fascinating look at the skill and artistry involved in brewing craft beer."--Publishers Weekly

Title: The Pint of No Return: A Mystery (A Sloan Krause Mystery)

The Pint of No Return: A Mystery (A Sloan Krause Mystery)