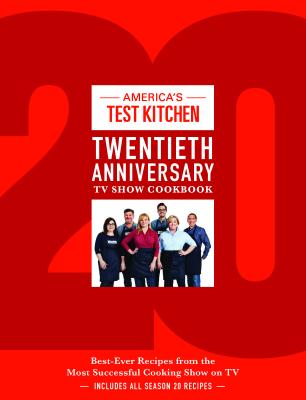 A giftable and gorgeous book featuring the very best recipes from the America's Test Kitchen TV show in celebration of its 20th anniversary and its renowned celebrity cast. More than 500 recipes from the show's 500-plus episodes are included here along with all the recipes from the 20th season--a stunning array of must-have recipes aimed at how we want to cook today.

As the longest-running and most successful cooking show on public television, America's Test Kitchen has reached a remarkable milestone after 20 years on the air. This curated collection of what the editors deem to be the very best recipes from the show is not only beautiful but is also a valuable collection of foolproof recipes along with fascinating commentary from the team that brought them to life on TV. The book captures the personality of the show and provides a first-ever behind-the-scenes look at its beloved cast members along with special features that relay the collected expertise, wit, and wisdom of the team behind America's most-trusted test kitchen.