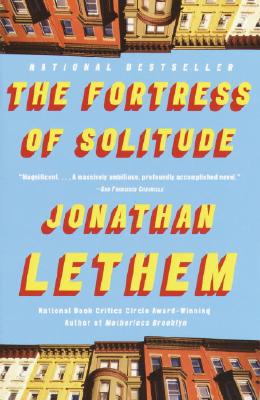 The Fortress of Solitude

From the National Book Critics Circle Award-winning author of Motherless Brooklyn, comes the vividly told story of Dylan Ebdus growing up white and motherless in downtown Brooklyn in the 1970s. In a neighborhood where the entertainments include muggings along with games of stoopball, Dylan has one friend, a black teenager, also motherless, named Mingus Rude. Through the knitting and unraveling of the boys' friendship, Lethem creates an overwhelmingly rich and emotionally gripping canvas of race and class, superheros, gentrification, funk, hip-hop, graffiti tagging, loyalty, and memory. "A tour de force.... Belongs to a venerable New York literary tradition that stretches back through Go Tell It on the Mountain, A Walker in the City, and Call it Sleep." --The New York Times Magazine "One of the richest, messiest, most ambitious, most interesting novels of the year.... Lethem grabs and captures 1970s New York City, and he brings it to a story worth telling." --Time

Title: The Fortress of Solitude

The Fortress of Solitude