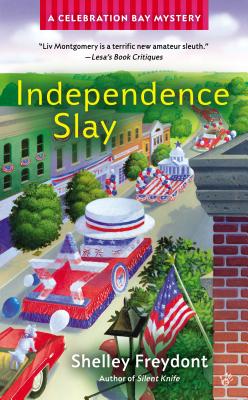 In the third Celebration Bay mystery, Old Glory is flying high for the Fourth of July holiday--until someone raises a red flag...

With Independence Day fast approaching, Liv Montgomery is swamped coordinating one of the town's biggest festivals. In addition to the traditional July fourth events, the town stages a spooky Revolutionary War reenactment that can't be missed. Every year, the ghost of local war hero Henry Gallantine--played by his eccentric descendant of the same name--appears at the top of the family mansion, kicking off the night's revelries. But Henry's annual cameo goes awry after the ghost signals SOS instead of his traditional cue. When Liv rushes to the rescue, she finds Henry missing and a real dead body instead of a fake haunt. Now she will have to hunt down both a murderer and a missing person quickly before unwanted political fireworks ignite and someone else winds up as local history...